​The Waitaki River is part of one of the largest complex braided river systems in New Zealand.  By flow rate, the Waitaki River is the fourth largest in the country, with an average flow at Kurow of 359 cubic metres per second. In the upper catchment, four braided alpine rivers (the Tekapo, Ohau, Pukaki and Ahuriri) come together to form a single channel downstream of Omarama.  The system has strong seasonal flow variability, with (unmodified) peak flows occurring in summer, and low flows being measured in the winter months of June to August.

The dynamic braided river system is home to a large variety of flora and fauna species – both endemic and introduced.  The River catchment also supports a number of recreational values including angling, hunting, jet boating, kayaking, and eel fishing. 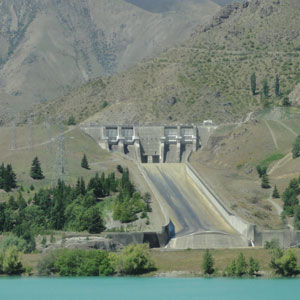 The Tangata Whenua (people of the land) in the Waitaki catchment are Kāti Hawea, Rapuwai, Waitaha, Kāti Mamoe and Ngāi Tahu.  The Waitaki is the ancestral river of Ngāi Tahu, fed by the sacred waters of Aoraki and the tears of Raki (sky father). The river is a symbol of permanance and source of spiritual meaning to Tangata Whenua.

Water from the Waitaki River system has been used to generate electricity since the 1930s.  A series of hydro dams generate from the rivers and canals and storage from the created lakes of Benmore, Aviemore and Waitaki.  The Waitaki hydro system generates around 20-25 per cent of New Zealand’s electricity.